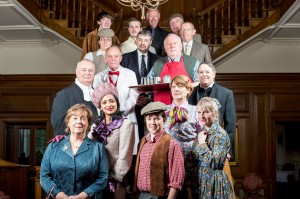 A knight to remember…….Harrogate Dramatic Society

THE MERRY WIVES OF WINDSOR

Following a year which has seen the typically eclectic comedic choices or Harrogate Dramatic Society range from JB Priestley to Peter Shatter, the group are now preparing for their first production of 2015.

Running from January 27st -31st. the new show is Shakespeare’s The Merry Wives of Windsor – and it’s a production close to the heart of its director, John Colston.  John, who was lucky enough to do a two-year part-time study course at the Shakespeare Institute in Stratford, says he’s really looking forward to HDS’s latest theatrical outing. “I was delighted to be asked to direct it.  I’ve always had an especial admiration for the plays of William Shakespeare.”

The director’s links to the plays of the Bard are long and deep, particularly when it comes to this play. His first taste of Merry Wives was in 1983 when the community theatre group Shakespeare-in-the-Park, based in Staffordshire, performed the play in the grounds of the lovely Wychnor Park. John said: “I was fortunate to be cast as the knight Falstaff. I enjoyed playing the old rogue immensely.  As the summer evening faded into night the setting beneath a great oak tree became magical”.

Colston was a founder member of the theatre group, which still performs an annual outdoor Shakespearean production. Such is his loyalty, he made their president in 2009. John said: “I was born and bred in Evesham in Worcestershire, not far from Stratford-upon Avon. I’ve always felt an affinity with the Bard and still visit the Royal Shakespeare Theatre as often as I can.”

Colston is confident HDS’s new production at Harrogate Theatre Studio will offer audiences rip-roaring entertainment. “It is a joy to be able to direct such a talented and strong cast in this production for HDS. It’s a wonderful farcical romp displaying the lighter side of Shakespeare’s genius”.